Alcohol Addiction – Are We Ignoring the Truth about Drinking?

What would you do if you found out that one of the most significant risks facing the health of your family was almost completely ignored in the media and in public discourse? You would probably be shocked and disappointed.

Sadly, that’s precisely what is happening. Alcohol misuse is one of the leading health problems in the United States, yet it is sorely underreported and under-discussed. There are many other health problems that, though they are serious, do not claim the lives of as many Americans as alcohol does, yet they receive more attention than alcohol.

Alcohol is a 253 billion dollar per year industry. And the industry is growing. And all the while Americans are inculcated to view alcohol consumption as something less harmful than drug use by advertisements and socially accepted “traditions.” In fact, most Americans are led to believe that drinking is totally normal. But alcohol is a form of drug use, especially when people drink to excess.

How Alcohol Differs from Other Drugs

All mind-altering substances share some similarities. But each is also different in its own way. Alcohol, for example, is quite different from other drugs, not only its effect on society but also how society views it.

We have to be cautious when talking about the “target audience” of drugs. We should always seek to avoid stereotypes. However, it is safe to say that certain drugs do tend to seem more appealing to certain groups of people. But not with alcohol. Alcohol is the universal intoxicant, the substance that individuals from every possible corner and niche of society misuse.

Because alcohol is universally misused across every possible sector of America, alcohol has also become the most lethal drug in America.

Alcohol Addiction Statistics – The Most Lethal Drug Problem in the U.S.

Let’s look at an odd disparity. On the one hand, the nation has been made more than well aware of the now 20-year-long opiate epidemic that we are still stuck in. But alcohol use has claimed more lives in the last 20 years than opiates have, however that fact is rarely discussed.

So let’s discuss it.

Another factor is the family consequences of alcohol abuse. In the U.S., about ten percent of children live with at least one parent who has a drinking problem. Growing up in a household of alcohol abuse has proven harmful effects on children.

An Even Bigger Problem Further Down the Road

Probably the most concerning revelation from the research is the effect that alcohol misuse has been having on adults in their 20s and 30s. Traditionally, people who consume alcohol heavily do not die from it until later on in life. But according to the new research, alcohol deaths are now increasing among young people more rapidly than they are among older adults.

For a direct assessment of the problem, we turn to Neal Freedman, a senior investigator in the National Cancer Institute’s cancer epidemiology and genetics division. He was also the senior author of the study. “Many of the diseases that are caused by alcohol occur among people who consume alcohol for many years, so we think this is concerning if the rates of alcohol-induced deaths are going up among people in their 20s or 30s. When that group of people are in their 50s and 60s … they’ll have very high rates of alcohol-induced deaths as they age. These increases are concerning, but the ultimate impact of alcohol on the population may be even larger going into the future.”

Today, it is still the older adults who have the highest number of deaths from alcohol-related causes. And those deaths are going up. But the rate of increase in deaths is greater among young people than it is among older adults, and that’s very concerning. Again we turn to Freedman, as his commentary on this particular subject is quite insightful. “If you wanted to look at the absolute number of deaths, like what group of people (had) the most number of people dying within the U.S. population, it’s among the older people. But if we think about where is the increase in this trend happening most, it’s the younger people.”

“If you wanted to look at the absolute number of deaths, like what group of people (had) the most number of people dying within the U.S. population, it’s among the older people. But if we think about where is the increase in this trend happening most, it’s the younger people.”

What Freedman’s assessment and the research data tells us is quite foreboding. Essentially, alcohol abuse is terrible right now, and lots of people are dying from it, but the problem is poised to become much worse in the coming decades if we do not take action now.

Residential Treatment is the Answer to Alcohol Addiction

As harsh and debilitating as alcohol addiction is, there is an answer to the problem, and that answer lies in residential addiction treatment.

Drug and alcohol addiction treatment centers can help pull struggling addicts out of the physiological and psychological morass of their habits and help them find life anew. Narconon specializes in this by utilizing a proven rehabilitation technology that exists nowhere else.

For over half-a-century, Narconon has saved those who thought they would never again experience a drug-free or alcohol-free life. Often in society, alcohol addiction, in particular, is looked on with a shrug and a dismissal. Not at Narconon. At Narconon, alcohol addiction is seen for what it is, a life-ruining and potentially lethal crisis that must be treated.

If you have a son or daughter, brother or sister, mother or father, or another family member who struggles with alcohol addiction, do not delay in seeking help. Contact Narconon today.

What Binge Drinking at a Young Age Does to a Person 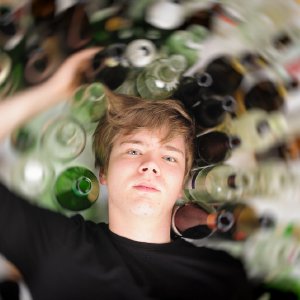